Posted at 17:15h in Geography by Beth Young 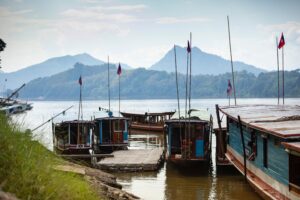 So, what is migration?

Migration refers to the movement of people from one place to another, it occurs when the perceived interaction of push and pull factors overcome the friction of movement. Migration can be voluntary, for work or economic gain, or involuntary, for example to escape political persecution.

For this essay question, we will be looking at the voluntary migration processes affecting people from Lao, focusing specifically upon the injustices caused due to social differences between Laos migrants and their destination communities in Thailand.

Does migration cause injustices due to social difference between migrants and nationals?

Let’s introduce the first argument point, being that South-South (S-S) migrants (people who move from one developing country to another developing one) are treated with hostility and segregated by the host community within their destination country. We can break this general argument down into smaller steps before bringing in the Laos case study to support this point.

We can support this point further by referring to examples from our Laos case study. Migrants from Laos are concentrated in areas associated with crime, such as urban slums, and are not accepted into Thai communities. This causes segregation between the two cultures and results in unfair and unjust treatment of migrant families and workers.

Introducing a counter argument to undermine your point and then disprove it by adding supporting evidence can strengthen your argument and allow you to access the highest marks in your essays and exams. A useful counter argument for this point is that migrants from Laos have a strong familiarity with Thai culture and language due the countries sharing a common heritage. Therefore, injustices due to social differences should not exist between these two nations. However, we can undermine this counter argument using statistics from the United Nations population data. The data shows that barriers for Laos migrants do still exist in Thailand, with over 200,000 migrant children still not enrolled in education and only 51 percent of migrants enrolled in public health. This means that our argument still stands and that there are injustices due to differences between Laos migrants and nationals in Thailand.

Migration injustices due to social differences in southeast Asia

The above is a well-developed and critically argued explanation that migration does cause injustice due to social differences. Using the techniques outlines in this blog post allows you to access higher marks for critical argument and evaluation in your exams and essays.

See the below argument graph for a visual tour of the case for migration causes injustices due to social differences:

The above graph and lesson explores the argument of wether migration causes injustices due to social differences | A Level Geography Lesson – Image credit: Endoxa Learning